Temporary employment is an effective way of meeting staffing needs. It offers great flexibility for both the employer and the employee. However, there are also strict rules related to agency work. The cases in which temporary employment can be used are strictly defined by law. Only in those cases is temporary work possible. This is also referred to as the motives for temporary work. The purpose of this is to protect both temporary agency workers and permanent employees.

The permitted reasons for employing a temporary employee are as follows:

Specific conditions are provided for each of these reasons. The duration of the permitted agency work and the procedures differ according to the reasons for which agency work is used.

Replacement of a permanent employee

A number of principles must be taken into account when replacing a permanent employee:

Moreover, a distinction must be made between the replacement of an employee whose employment contract has been temporarily suspended (maternity leave, illness, leave, etc.) and the replacement of an employee whose contract has been terminated. In the latter case, the procedure also differs depending on whether the contract was terminated for an urgent reason or by notice, or whether the employment contract was terminated for another reason.

There are also different procedures depending on whether or not there is a union delegation in the company.

If there is a trade union deleg ation in the company, an agreement must always be reached before the start of the employment contract. As soon as the user has received the agreement of the trade union delegation, he/she must inform the Social Law Inspectorate within three working days. 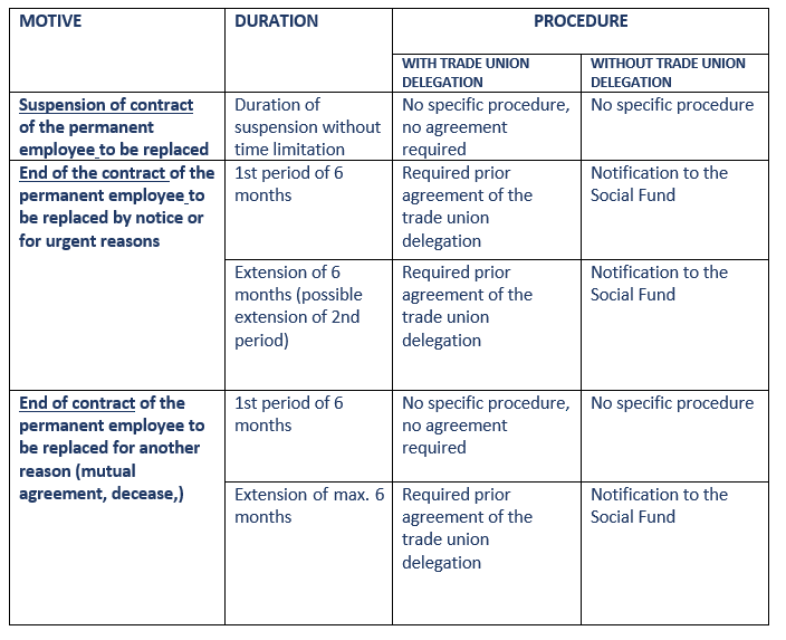 Temporary increase of work" means all activities that increase the normal activity of the company. This can be interpreted broadly.

Here too, the procedure differs depending on whether or not there is a trade union delegation in the company.

"Exceptional work" includes all activities that are not part of the 'normal' activities of the business. Some examples are:

No agreement from the trade union delegation is required for this work , provided it does not last longer than 3 months . If it appears that the work will last longer, a new procedure must be followed. This procedure and the maximum duration during which the user may call upon a temporary worker vary according to the reason for the exceptional work. There is also a different procedure to follow depending on whether or not there is a trade union delegation present. Do not hesitate to contact us if you have specific questions about this.

Entry ('temporary work with a view to permanent employment')

Motif "inflow" is an additional motif since 2013. This motive is used with the intention of permanently hiring a temporary worker after the interim period. This allows both parties to get to know each other better. The user can test the skills and attitude of the temp. The temporary worker gets to know the working environment.

However, it is important that a number of specific rules are observed:

When employing a temporary worker, one should always carefully consider the motive that can be used. Sometimes several motives are possible. In that case, a choice must be made.

However, it is important to respect the rules applicable to each motive as non-compliance with these rules may result in sanctions.

Do you have a question for Heidi Vergauwe?